Top tip: ‘Invest in a good grinder instead of any other thing. A beautiful cup doesn’t give you the right taste, but a good grinder will.’ Photo: Kristoffer Paulsen

Whether you’ve panic-bought an espresso machine, wish to enter the nerdy world of pourovers or are preparing to white-knuckle it through this time armed only with a plunger (aka a French press), we’ve called on the experts to up your quarantine coffee game at home.

Coffee-making is probably best aligned with the sweet science of baking. Weights, temperatures, patience and considerations like “how humid is it today?” can play a major role. But also like baking, you can get wildly detailed about it, or you can still wing it so long as you’ve learnt the basic principles. And baristas can give you the keys to getting the most from whatever you have at home. 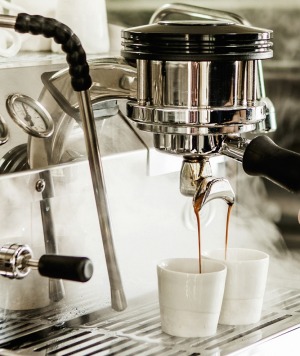 It takes a bit of tinkering to get the coffee to water ratio for espresso just right. Photo: Graham Jepson

What’s in a bean?

Arabica and robusta beans are the top dogs of the coffee world, but what’s the difference? Arabica dominates the high-end market. The beans are sweeter, oilier and fruitier, with big acid bling. Robusta is a hardier, rounder, nuttier little beast. It’s often dissed as a rough and ready little sucker, but it’s also packing double the caffeine of its elegant cousin and rounds up many blended roasts.

Which roast is the best?

Which wine is the best? The question is about the same. Coffee roasting and blending is as complex as winemaking with as varied results. Light and fruity roasts are best for filters like pourovers, according to Calere Coffee’s Alicia Feng, as they “reserve the most natural flavour from the green beans” to chocolate or caramel dark roasts for espresso. But, like wine, floral espresso may be your jam, as might dark and stormy plungers. You do you.

How do I grind my coffee?

“Even the cheapest espresso grinder will do a better job than pre-ground coffee,” Feng says. Bowen Holden of Melbourne’s Patricia Coffee reckons it’s fine to buy smaller amounts of what you need, ground fresh by your cafe. “I’m all about making people’s experience easy.”

If you are grinding your own, John Kozsik, who trains baristas for Lavazza, says that for French press it should be “similar to cracked pepper”. For a pourover, you want “coarse sand”, while it’s a finer powder for espresso.

For espresso, the hot tip is don’t make it too hot. The sweet spot (literally) is between 60 and 70 degrees, before the jug gets too warm to touch. If you don’t want your coffee going cool, heat the cups before making your coffee.

Feng says there is one very important tip to remember: the best milk doesn’t necessarily work well with coffee. It can overpower it. She says you could consider buying the pro-milk from your cafe.

“Look for the Riverina Premium Gold series, which is used by barista champions, or in Melbourne, Saint David and Schulz. They are designed for coffee and most of them taste much creamier and sweeter.”

For mylks, she says go for Bonsoy, Almond Milk & Co, and Oatly.

Keeping it fresh: can you freeze coffee?

Roasted coffee goes stale so you want to slow that process as much as possible. Feng says to “store it in an airtight container avoiding light, heat and humidity.”

Freezing beans slows the process even more, but for maximum preservation, she says most champions vacuum seal to prevent oxidation, and you get a machine from the supermarket for about $50.

The professionals’ guide to home brewing Sometimes called “the plunger”, and possibly, like mine, being used as a vase, this is the tool most of us have to hand and think we know how to drive. And yet, you might end up sucking tar or something that tastes like dirt strained through a sock. It’s Holden’s home weapon of choice alongside his “Australia’s best dad” cup.

Holden likes the versatility. “If you’re having it white, you’ll likely prefer espresso roast, but if you want it black you can drink a fruity filter blend.”

First off, the measure matters (see above for the recommended grind). The golden ratio is 60 grams per litre of water. If you want to eyeball it (Holden says he never weighs anything at home) a tablespoon weighs out 10 to 15 grams, so work out what yours measures when heaped and add the number of spoons accordingly. You also want your water just slightly cooled, so let the kettle boil and pour, gently, after 30 seconds.

When you think you’ve finished waiting, wait some more. Ninety-nine per cent of French press failures come down to impatience or coffee addict angst. We push the piston down too soon, too forcefully, or, worst of all, pump it up and down, over-extracting the coffee and getting grounds in the mix. Once poured, stir the grounds then let them sink. Plunge after five to eight minutes for a proper brew.

So you bought an espresso machine. Mazel! You are going to really, truly appreciate your barista when this is all over. They knock out a measure of coffee, tamp the basket, load the handle into the machine and then a sweet amber liquid flows forth. Easy. But your machine groans for a full 30 seconds and delivers a mean drizzle of treacle or gushes a thin watery liquid. Don’t chuck it on the street just yet.

Espresso takes a finer grind than plunger coffee and the darker roasts are richer and deliver a more velvety result. That said, you don’t need to go for the deepest flavours, just experiment with what you like.

OK, this one is tough. Holden says he wouldn’t usually force people to get involved in measurements but it’s the key to espresso success. The sweet spot is when the liquid that comes out weighs double that of the coffee grounds you put in, and it will take the machine 25-28 seconds to pour it out. So if you put 20 grams of coffee in, you would be looking for 40 grams of liquid in your cup.

You know that watery shot that gushed out quickly? Not enough coffee in the basket. That treacle? Too much, too tightly packed. When you hit the sweet spot, you know that is the weight of grounds to add to your basket (maybe it’s 19 grams, or 21) and you can then weigh that amount every time. Set and forget. It may be fiddly to work out at the start, but also cuts waste in the long run.

You likely know about this method of home brewing because Steve from accounts got very, very into it last June. This is a coffee nerd’s dream.

The method, which involves a careful extraction of the coffee by pouring water very slowly over your grounds through a fine filter, produces a very pure expression of coffee. You might hear the words ethereal, and terroir. That might make you retch. Fair enough. But if you find the milky world of lattes and the bold tones of other coffees a bit much, this is a great option, while still getting your buzz.

Not only that, it’s the tea ceremony of coffee making, the technique most baristas claim to use when they have the space and time on a day off.

The most common brand is a V60 by Hario, which consists of a conical cup and paper filter that you sit over your vessel of choice. A Chemex uses a finer filter to cut out even more oils.

Use the same ratio of coarse ground coffee as you would for a plunger: 15 grams of coffee for 250ml water. But it’s all, as the name implies, in the pour.

Feng says never ever use tap water, as you taste every part of this coffee, including chlorine. The main mistakes in the process are also pouring in the water too fast, and over-stirring, which extracts the bitter notes.

And if you find it too hard, an Aeropress is a filter coffee method that you don’t need skills for. “Everything in one set, super easy to clean, just simply good, why not?” says Feng. Where to buy your beans

Note: All the roasters in the above lists deliver nationwide.


Read more: How to make cold brew coffee at home (plus supermarket drinks put to the taste test)

Market Lane coffee from Melbourne. Photo: Supplied 10 of Sydney’s best coffee delivery services (all deliver nationwide) Working from home doesn’t mean skimping on quality coffee. Whether you’re time poor and can only spend the time it takes to pour hot water in a mug or devoted to the full espresso…

Manager of The Full Pantry, Hannah Arnold. Photo: Simon Schluter Feeling a little bit of enviro-guilt ordering your morning flat white from your favourite cafe in a disposable cup and plastic lid? You’re not alone. As cafes around the country gradually come back to life, owners and baristas are considering…


Read more: Is it safe to use reusable coffee cups again?

Market Lane coffee from Melbourne. Photo: Supplied 10 of Sydney’s best coffee delivery services (all deliver nationwide) Working from home doesn’t mean skimping on quality coffee. Whether you’re time poor and can only spend the time it takes to pour hot water in a mug or devoted to the full espresso…

Five tips for making a better cup of tea

Are teas the new cocktails?

Camping out sure ain't what it used to be

Campos to open in Park City, Utah as Australian coffee kings brew a US takeover

Cold brew in a cask? Convenience coffee put to the test

How does Noma do Australian coffee?

How much coffee is too much?

How to make cold-brew tea

Is coffee good for you?

The plight of tea drinkers in a coffee-addicted city

This coffee art will blow your mind

True brew: why coffee just might be good for you

What would science know about making tea?

Keen beans: How to take your coffee love to the next level

Australia's strongest coffee is literally not for the faint hearted

Coffee in a cone lands in Australia

Are you brewing your tea wrong? Five tips for a better cup

Automated coffee machines are the baristas of the future