The Queensland dining scene is having its time in the sun right now, with an influx of money transforming it into a foodie paradise.

Melbourne and Sydney, look away now. Your little second cousin is now the belle of the ball. We’re talking about a capital city with more restaurant openings than closings, that parties on until way past 10pm, and that is interpreting its uniquely tropical nature in its own evolving cuisine. Yep, Brisbane.

The big story in food this year is the booming dining scene in Brisbane and beyond. But don’t take my word for it. Take the 31 Queensland restaurants to receive chef hats in the Good Food Guide this year (up from 22), with 10 of those restaurants being new to the Guide. 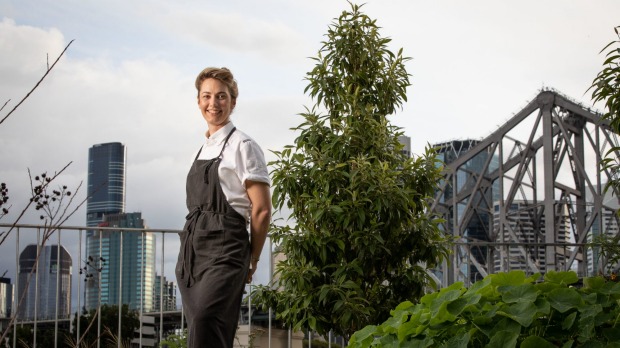 Why is Brisbane so hot? Money. In June, the state government announced spending of $50 billion over the next four years, adding to the massive investments in Queens Wharf, Howard Smith Wharves and the Cross River Rail. It’s why seriously chic hotels such as The Calile and W Brisbane have opened – the first with the ever-buzzing, poolside Hellenika, the latter with the newly urbanised Three Blue Ducks.

With the influx of new talent from down south, the splendid local produce and the evolution of a strong coastal style, Brisbane is on the must-visit list of every foodie traveller. Here’s where to eat and why.

Not since the arrival of Southbank in Melbourne and Barangaroo in Sydney have we seen such an instantly popular new restaurant precinct as the Howard Smith Wharves development on the Brisbane River. Two hundred million bucks later, and the heritage-listed 1930s wharves have given Brisbanites a star-studded, fairy-lit view of their famous bridge and city skyline. From the inaugural Mr Percival’s over-water bar and Felons Brewing Co, it has grown into a hotbed of prime drinking and dining venues overseen by executive chef Patrick Friesen and culinary director David Finlayson. To the rear is the Fantauzzo Art Series Hotel (check the lobby art) and next door, a series of innovative event spaces.

In less than a year, the precinct has produced two newly hatted restaurants – Greca from Jonathan Barthelmess of Sydney’s acclaimed Apollo restaurant, with its “Full Greek” feast from taramasalata and flatbread to baked lamb shoulder; and Arc Dining, where Alanna Sapwell does clever, thoughtful things with seafood and ices a layered peach melba cake with tangy finger limes as if they were hundreds-and-thousands sprinkles.

Next up: Barthelmess’ new modern Japanese, Yoko, scheduled for November, and Stanley, a contemporary Cantonese restaurant in December, with former Longrain chef Louis Tikaram in the kitchen.

Walking across the Goodwill Bridge to Stokehouse Q is one of Brissie’s greatest treats. Here is your quintessential Queensland menu, all crisp prawn tacos, barramundi belly crisped with miso, grilled beef, and spectacularly simple desserts.

Just along the river, GOMA at the Gallery of Modern Art is a delight by day, with artful cooking from Douglas Innes-Will. Meanwhile, Fish Lane is the beating heart of the new south Brisbane night-life scene, from the small-but-sophisticated Maker cocktail bar to the lively Julius pizzeria. Order Vietnamese food and negronis from a shipping container (Hello Please), or do bistro food at Maeve Wine or La Lune.

Just around the corner is Gauge, one of Brisbane’s most anarchically rewarding small restaurants, with its smoked bushfire gin cocktails, black bread, celeriac desserts and J Dilla hip-hop playlist. But the biggest new opening in the Valley – and in Queensland, for that matter – is also its smallest. Joy, a tiny restaurant tucked away in a city laneway, seats 10 people propped up at the kitchen counter. Husband-and-wife team Tim and Sarah Scott do everything, and I do mean everything. They cook, serve, greet you at the door, pour and discuss the drink offerings, stop and chat, and even do the washing up. Their tasting menus flow from silky chawanmushi custard with smoked caviar and sour pumpkin to a rich-as mont blanc dessert, made with squiggly worms of roasted Jerusalem artichoke caramel. Oh, joy.

Everything old is new again

A lot of future-proofing has been going on. Long-term player Philip Johnson has revitalised his E’cco Bistro, Shannon Kellam has the ever-so-Frenchy Montrachet buzzing with life and foie gras, and 1899 Enoteca keeps finding new reasons to celebrate good wine.

Aria Brisbane may have closed, but the Fink Group’s Otto just gets better and better as Will Cowper riches up the Italian classics with ease (not to be missed: the feather-light focaccia).

And the Ghanem Group outdoes itself with the heritage charm of Donna Chang, spicing up Brisbane’s big night out scene in a splendid former bank building, complete with soaring ceilings, glittering chandeliers and southern rock lobster with XO chilli sauce.

It’s looking pretty sunny on the Sunshine Coast, about 100 kilometres north. As well as the much-loved Rickys and Sum Yung Guys in Noosa, the area is also home to the Queensland restaurant that nailed the state’s highest score in the Good Food Guide 2020. Using herbs and vegetables from its own farm and seafood from local fisherman, Danielle Gjestland’s modern Japanese Wasabi Restaurant & Bar has gained an impressive 16.5/20, and two chef hats. Add in Montville’s French-inspired The Long Apron, the open-air cooking of Homage in Grandchester, and the spiced-up modern Asian menus of the Spirit House in Yandina and The Tamarind in Maleny (and Nu Nu, in the far north) and you’re talking destination dining with a fiercely regional spin.

Heads up to Burleigh Heads Newly christened hot-spot Burleigh Heads, in the investment “growth corridor” that stretches to the Gold Coast, sees Guillaume Zika doing a heroic job of feeding more than 600 diners with wood-fired pizzas, burgers and gelato in the vast dining room and terrace of Burleigh Pavilion.

Hats off to you all.

The Good Food Guide’s third annual national edition, with hats awarded across Australia, was launched on September 30 with our presenting partners Vittoria Coffee and Citi. The Good Food Guide 2020 is on sale now in newsagencies and bookstores, and at thestore.com.au/gfg20, $29.99 with free shipping.

Choose your own adventure in Tropical North Queensland this summer

Mossman Gorge.Source:Supplied . In partnership with Tourism Australia The world-renowned natural wonders of Tropical North Queensland are only a short flight away for most Queenslanders. Starring World Heritage sites the Daintree Rainforest and the Great Barrier Reef, this majestic region is made for adventure seekers, especially in the lush, green…


Read more: Choose your own adventure in Tropical North Queensland this summer

A climber looks at the views after climbing Mount Tibrogargan. Picture: Phil Hammond Rescue operation for fallen hikerSource:News Limited WHEN you think of dangerous, death-defying mountains, most people’s minds immediately jump to places like Mount Everest and Denali. But high up in the Glass House Mountains, an easy hour away…

Queensland — the love story’s not over yet.Source:istock IT’S a heartful letter to a hurtful ex — but this is no ordinary hate letter. As the clean-up from ex-Cyclone Debbie continues, the official Visit Queensland Facebook page has posted a cutting response to her trail of destruction. “Dear Debbie, You…

Dunk Island. Picture: Supplied.Source:Supplied A once-popular Queensland resort island ravaged by Cyclone Yasi has been sold to an investment group hoping to inject new life into the forgotten paradise. London-based group Mayfair 101 has bought Dunk Island for nearly $32 million, and promises to bring the area back to its…

Cape Tribulation in Tropical North Queensland. Picture: Jesse Lindemann/TEQSource:Supplied . In partnership with Tourism Australia Bushfires and the COVID-19 pandemic have spelt disaster for many regional businesses across Queensland. So when you take a well-earned break this summer, put affected destinations at the top of your list. Try a few…

Open for Business: Why the Scenic Rim is Queensland’s best kept travel secret

Queensland travel: 25 best things to do in the Sunshine State

Queensland’s desert has become an oasis

Tropical North Queensland: Places to eat and things to do

Why Far North Queensland should be on your travel bucket list

TripAdvisor reveals Australia’s best hotels – and the world’s most romantic is in Montville, Queensland

10 reasons to explore the wilds of outback Queensland

Tips and things to do on a family holiday: A journey into Far North Queensland

Among the vines in Queensland's Granite Belt

Where to eat and drink in far north Queensland

Eleven of the best eating places on Queensland's Gold Coast

Birdsville, outback Queensland: One of Australia's most remote towns revitalised

Brisbane, Queensland: The Fantauzzo is an inspirational Art Series hotel

Far North Queensland: A foreign land in our own backyard

Far North Queensland: The Cassowary Coast is proud of its deadly avian mascot